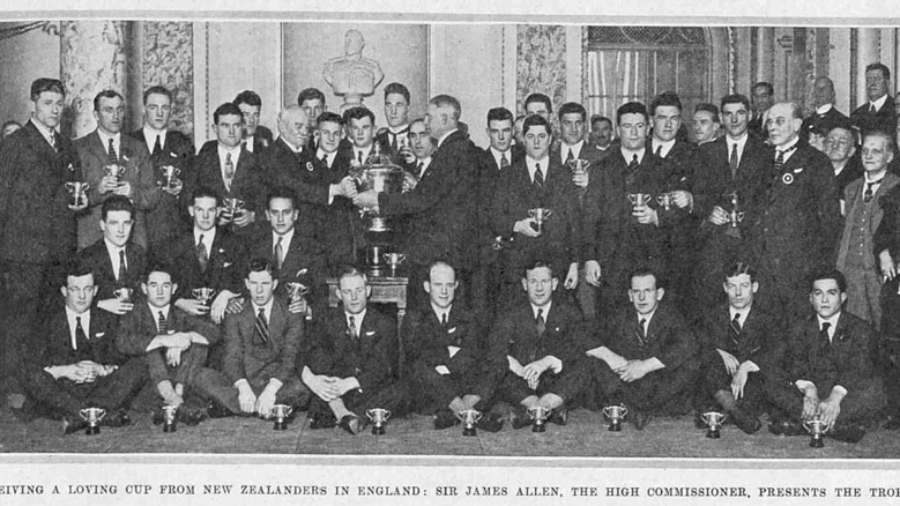 WHAT HAPPENED TO THE INVINCIBLES’ CUP?

In 1925 a group of influential New Zealanders living in London were so proud of the 1924–1925 Invincibles that they decided to take up a collection among NZers in Britain to make a presentation to the All Black team.

They gave them a huge silver “loving cup”: the trouble is, nobody knows where it is now.

By all accounts 400 to 500 people donated enough to buy the cup, with a replica for each member of the team. They would be suitable mementos of the great tour. The Otago Daily Times told its readers,

The cup selected will prove to be a very handsome trophy, and one that will doubtIess be highly prized by every resident in the dominion. Imposing in size, it is of sterling silver with two handles, and cover. It has richly chased scroll handles with applique cut card ornamentation round the body, and has the same decoration applied to the cover. The middle space will lend itself admirably to a suitable inscription. The trophy is altogether an excellent example of the highest quality workmanship, and was made by the Goldsmiths’ and Silversmiths’ Company, Regent street.

To the shining leaf and the jersey black,
To the journey without defeat.
To the mighty heart of the striving pack,
And the runners with flying feet.
This loving cup drink, drink in turn
While memory stirs each breast;
And lift it high to the Silver Fem,
And the record which beat the best.
The cup was inscribed with the words,

The first celebration on 21 January 1925 was a luncheon at the Piccadilly hotel in honour of the All Blacks with a very distinguished guest list, including the Prince of Wales, among the 300 present. The Prince proposed the toast to the New Zealand Rugby XV and presented them with a silver loving cup “as a testimony from English sportsmen to the admiration felt in this country for the splendid achievements of the All Blacks.”

(This cup should not be confused with the Prince of Wales’ Cup, for which Maori played from 1928. That was presented by the prince in recognition of the Maori tour of France and the UK in 1926 and was brought back to NZ by Gordon Coates. I am grateful to Ron Palenski for the information).

“Out of a compliment to the New Zealand guests a sprig of wattle was among the floral decorations of the tables” and curiously, the event ended with a cablegram from the Prince to the English cricketers playing for the Ashes in Australia. The Australasian colonies seemed to have blurred into one for the English organisers.

The second event was held that evening. The Scotsman reported the next day,

New Zealanders in London had their unbeaten Rugby team all to themselves at the Hotel Victoria last night. It was a joyous reunion, a big family party. Over 400 New Zealanders in the Mother Country subscribed to a handsome two-handled silver cup, standing about 2 feet high, for presentation to the New Zealand Rugby Union and to a small silver cup for each of the men. Sir Arthur Myers, an ex-Mayor of Auckland, added to the gifts a gold medal for each of the All Blacks.

The Manchester Guardian described the gathering,

New Zealanders in London had a family party at the Hotel Victoria last evening for the members of their Rugby football team. The All Blacks sat in a semi-circle in front of a little platform which was ashine with a huge silver loving cup and a fleet of little silver replicas, the gifts of the New Zealanders in this country to the New Zealand Rugby Union and to each member of the team.

Behind the players crowded several hundreds of their compatriots listening to the congratulatory speeches which made the All Blacks blush, and applauding each recipient of a cup….

Lady Allen, wife of the High Commissioner, presented the cup which stands about 2ft. high….

Mr Stanley Dean, the manager, described the presentation ceremony as “the end of a wonderful tour, the end of a perfect day.”

The All Blacks then gave three daunty cheers and sang a Maori rendering of “Jolly Good Fellows” in honour of Mr. and Mrs. Cecil Wray, who have shown them special kindness.

(Cecil J Wray represented the New Zealand Rugby Union on the English Rugby Union. He and Mrs Wray were “Pappa and Mamma” to the team.)

Much of the British press got the two events muddled, reporting only one large loving cup, inscribed with the verse, a tribute from British sportsmen, presented by the Prince. New Zealand papers repeated the mistakes. Britain-based New Zealanders who contributed toward the cup must have been vexed.

A few newspapers went to the trouble to correct the mistake, one of them the Illustrated Sporting and Dramatic News of 31 January 1925, another the Tatler of 4 February.

The cup in New Zealand

Stanley Dean had said the New Zealanders’ cup “will be the largest and the best trophy we have got.” Cecil Wray wrote to the Rugby Union in Wellington,

We would like the loving cup to be the property of the N.Z.R.U., and to be used at big functions. One idea is that it might be used at celebrations held by whoever wins the Ranfurly Shield each year. Then it could be filled and handed round as big loving cups are handed round at big city banquets, each guest having a drink from it. Mr Dean thinks that it would make an excellent trophy for the North Island v. South Island match, but first I hope it will be well and truly filled and drunk when the team has its official reception from the New Zealand Union on its return to the dominion. (Otago Daily Times 27 February 1925)

Dean wrote in his official report,

The cup, which is for competition in New Zealand, will need to be allocated. I would suggest that the North v. South Island series of matches would be the most fitting way of dealing with this trophy. (Evening Post 24 April 1925).

The Evening Post reported the cup had arrived in Wellington under the care of Harry Frost, president of the NZRFU, on 16 March. The trophy was conspicuously displayed alongside a silver cup presented by the Mayor of Vancouver on the wall at the official luncheon and jazz ball to welcome the players home—but, perhaps sadly, not “well and truly filled and drunk”.

All three cups were exhibited in the Wellington Court at the New Zealand and South Seas International Exhibition in Dunedin in 1926, along with other rugby trophies.

Occupying one of the most prominent positions in the Wellington Court at the Dunedin Exhibition are the magnificent silver cups and trophies presented to the All Blacks of 1924-25 during their triumphant tour, together with other well-known Rugby trophies which, every day, are examined with the greatest interest by hundreds of football enthusiasts from all parts of the Dominion. Pride of place is given to the cup presented to the team by the Prince of Wales…. Underneath the cup presented by the Prince of Wales is the big Loving Cup presented by the New Zealanders in the Old Country, and another large cup replete with the Coat of Arms of Vancouver, and presented by the Mayor of Vancouver…. together with the well-known Moascar Cup…. The exhibit as a whole is completed by the presence of the famous Ranfurly Shield, at present held by Hawke’s Bay.

After the Exhibition the Ranfurly Shield and Moascar Cup (held by Te Aute College) went missing for a time, but the other trophies arrived safely back in Wellington.

The big cup was awarded to the winners of interisland matches as planned, the Christchurch Press reporting on 1 June 1932,

Regarding the inter-island match to be played on Saturday…. It was decided to write to Wellington, asking the New Zealand Union to send to Christchurch the Loving Cup presented to the All Blacks on the last tour of England by admirers. This trophy is used for competition in the North v. South matches, and it is proposed to hand it to the winning team after the game. The winning team’s name to be inscribed on the trophy, which is kept permanently in Wellington.

The Rugby Museum in Palmerston North has one of the replicas, the one given to Alfred Hubert (Alf) West of Taranaki, but Stephen Berg, the Museum’s Director, does not know where the big cup is.

Nor does the Rugby Union in Wellington. I live nearby and visited. There was a magnificent display case full of silver and gold trophies, but no 1925 New Zealanders’ loving cup. I was asked to submit my enquiry by email and eventually received the reply, “Thank you for your enquiry. Our historical team have come back to advise we are not in possession of this cup. Unfortunately, we do not no where this is.” (sic, “nowhere”: Dr Freud would have enjoyed the slip).

In 1925 the Otago Daily Times said the cup would “doubtIess be highly prized by every resident in the dominion.”

Well, not very highly, not by every resident—and not for long it seems. 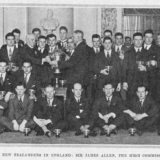