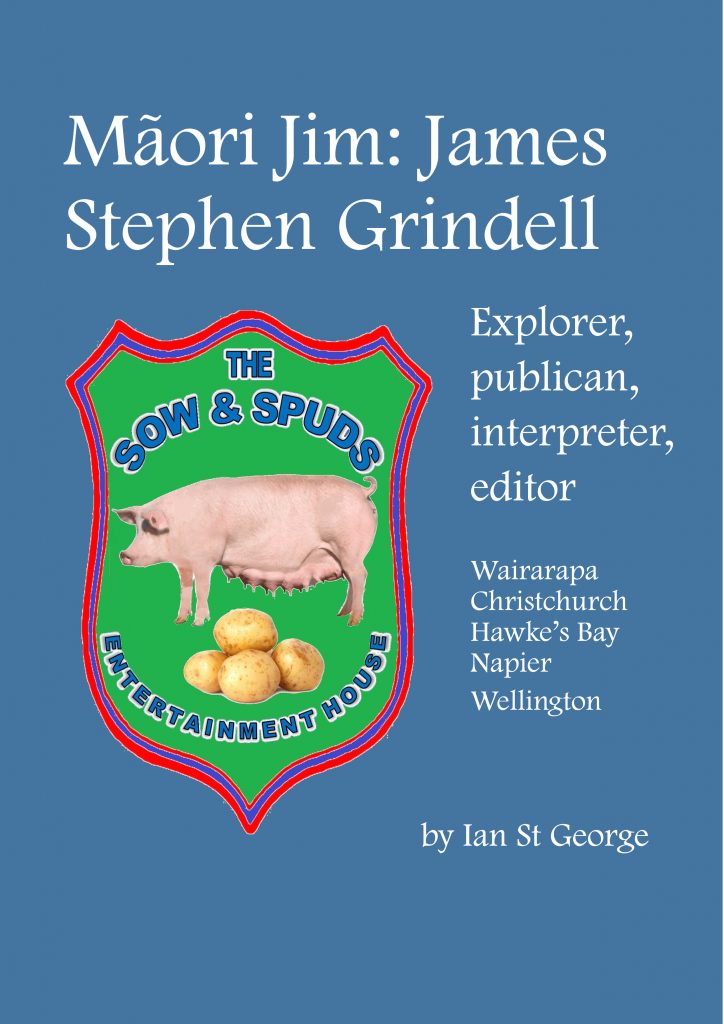 Born in Kettering Northamptonshire in 1823, James Grindell agreed with his schoolmates that they would all run away to sea, but only he did so. He was treated badly by his captain so jumped ship at Sydney and in 1840 joined a smuggling schooner bound for New Zealand with a cargo of contraband.

The authorities in Wellington confiscated the vessel, the crew were stranded and Grindell lived with a Maori girl near modern Levin for the next few years. He was proud to be known as Maori Jim.

In 1844 he and two mates, ill-equipped with food or clothing, crossed the Tararua up the Tokomaru and down the Mangahao rivers and reached Te Kaikokirikiri (modern Masterton). It was the first recorded crossing by Europeans. His companions were drowned crossing the Ruamahanga near Gladstone and Grindell walked on south to FA Weld’s station at Wharekaka, where he stayed briefly until setting up the “Sow & Spuds” hotel with a Maori woman as partner. He was by now fluent in te reo.

He worked as an overseer on the Christchurch–Lyttelton road and the Remutaka Hill road before moving to Hawke’s Bay in 1851 to manage a store on the site of Napier. He spent most of his life in Hawke’s Bay.

Here his skill in te reo was much in demand: he worked as interpreter in the Napier courts and for Donald McLean and others in the Land Purchasing Department. He was the founding editor of the Maori newspaper Te Waka Maori.

His weakness and downfall was alcohol. His work was repeatedly interrupted by drunken and often violent episodes resulting in long periods of unemployment and “a continuous up hill struggle for a bare existence”.

James Stephen Grindell, publican, ganger, interpreter, editor, was a well educated, intelligent, articulate man, a skilful negotiator, well versed in te reo and respected widely for it, a skilful and literate writer of English. His contributions to our history are the Remutaka Hill road, Te Waka Maori and his involvement in negotiating land sales in the eastern and lower North Island.